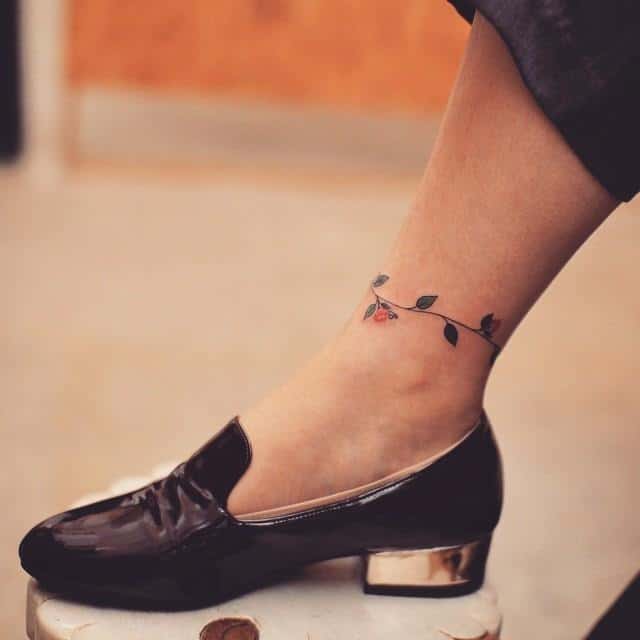 Roses are beautiful flowers. It is a popular tattoo choice, whether colored or printed in black ink. Roses symbolize passion, love, beauty and strength. The color of the rose itself can mean certain things – black for loss, red for passion and white for innocence. We are showing you best Rose Tattoos for women, check out below..

You could say that flower tattoos are one of the most chosen designs by women because of their so feminine shapes and designs, especially roses, which are the most popular. It is rare, in fact, to see a man tattooed with this motif, although there are exceptions. The shapes, colors, curves, designs and beauty of this singular flower are the main reason for its choice. The flower, in addition to its obvious aesthetic advantages, also has a symbolic meaning.

Already in antiquity, both the Romans and the Greeks associated the rose with love and beauty. Let us not forget that in ancient Egypt, roses were used to worship the goddess Isis, considered the ideal mother and wife. In the same idea, in Christian times, the rose began to represent the Virgin Mary. It was called the “Mystic Rose”. Do not forget to mention the rose of Sainte Thérèse de Lisieux or Sainte Thérèse des Roses, among others. However, the best-known meaning is that the rose symbolizes immortal love and beauty above all, as well as the dark side due to its thorns which symbolize loss and pain.

Beautiful Rose Tattoos for Women on Back

However, its meaning can also vary, if additional elements are included in the drawing, such as a butterfly, the name of a loved one, a dagger, a barbed wire, a cross, or a skull, among others. Most of the time, these popular motifs were known thanks to the sailors who tattooed a rose with the name of the loved one, to remember them during the trip.

140 Forearm Tattoos for Men with Meaning

The feminine forms of the rose symbolize the woman in a certain way, that is why she can personify the fiancée, the wife, or the mother. On the other hand, the rose is also popular in the world of body art, because it is one of the easiest patterns to tattoo, on any place of the body, by changing its shape its size. Another point of importance is that each color indicates a different meaning. For example, the yellow rose is linked to happiness, adult love, jealousy, or jealous lovers. On the contrary, white roses logically indicate purity, spirituality, or even a secret admirer.

The pink roses symbolize healing, elegance, virtue or grace. Blue roses are linked to fantasy or the impossible. Black roses signify darkness, separation or death and are, for example, widely used for body art printed in memory of a pet. In general, all these achievements show us that roses are one of the motifs with infinite themes. They are a real source of inspiration for any tattoo lover and are one of the best options.

If you are here, it is probably because you like or think you are getting a rose tattoo, one or more at a time. Surely the majority of people who choose these designs are women or girls. We have put together this collection for you, so you can choose the ones you prefer when you decide to get a tattoo.

A rose with thorns in black and gray tones, with many shadow effects. This drawing is located on what appears to be that person’s calf, just above the ankle.

This girl wears a pretty creeper tattooed on the front part of the forearm. Very colorful, in pink tones for flowers and green for leaves. We also included a sentence. I never promised you a rose garden.

A tattoo located on the belly. It looks like it was just made for the ink leftovers that we still see on the skin. This rose full of thorns is crossed by a needle.

The following drawing is that of a rose imprinted on the forearm of this person, accompanied by several stems with thorns and leaves. This person chose the typical colors of roses, which is to say, the intense red which contrasts with the green.

You can also choose a design in gray and black tones. With shadow effects tattooed on the arm, which gives excellent and more original results than the typical red rose so commonly chosen by many people.

Tattoo with letters and a rose. The colors of the composition are typical of the Old School style, very showy and characteristic. Greens, pinks and blues are the tones that were used during its realization.

I don’t think the idea of ​​tribal tattoos was very good, although the contrast with the colors of the rose was successful – the only thing in common between these elements is the curved lines. But as they say, tastes and colors …

This boy has a rose tattooed on his side. It seems unfinished – or at least, I consider that the result would be much better if the flower was colored or if there were some shadow effects. So it seems incomplete.

This person presents us with some pretty flowers of different colors tattooed on the kick. These are two roses, one red and one blue, colors that combine perfectly with the green tone of the stem and flowers.

The main design is repeated on each side, a dolphin in blue tones. One of the dolphins is also placed on a blue rose.

Large blue rose tattoo with a stem full of leaves, which ends in a spin. All this surrounded by stars circling the elements, giving a certain relief effect.

This little rose is accompanied by several tribal lines. Although generally, we do not find the mixture very successful, it is certain that in this case, the result is not so bad, perhaps because the lines unite and seem to form the stem of the flower. .

This design is also very characteristic of the Old School style. The Old Scool style is characterized by its colors and the patterns that are chosen. Roses are very present among them.

This tattoo has just been made. A simple rose on a stem, made in black ink.

>>>>>> 13 incredible tattoos very simple but that waste elegance. You will want to become one

On the lower back, on the lumbar area. We find a drawing that we have already seen previously on different people. The tattooed rose with tribal lines.

Nice photography in black tones on which is as important what was printed as the holes that we left in order to give a dimension to the drawing.

And one more, because this drawing is very widespread. These girls certainly chose this drawing because they saw it on someone else, maybe on one of our tattoo pages? Each one gave it a personal touch by using different colored inks, but the design is the same.

A couple, each tattooed with one or more roses. The quality of the man’s tattoo is lower than that of the woman’s drawing. Maybe the human one was done many years ago.

Pink where we played with the contrast between light and shadow.

A rosebud tattooed on the belly.

One in color and the other in black and white. The colorful rose is much better, with the colors typical of the Old School style that we talked about earlier.

A rose from which a candle comes out.

A rose printed on the nape of the neck. Although we have said a few times that flowers always require color, the case of roses is different because the result can be very good even when printed in black tones.

This person dedicates his drawing to his mother and father.

On this woman’s arm and shoulder.

Nice tattoo of a blue rose for women.

Must Read: 20 amazing hairstyling ideas for girls; You have to try them!

A large tattoo of brightly colored roses. A bodywork dedicated to the mother of this person.

Weird, this tattoo. I would like to know the explanation that this person gives us its meaning. We can see two skulls of different colors holding a key between the teeth.

Rose with green leaves on the back. Here the number of green leaves is much higher. Generally, only one or two are included.

Delicate pink that accompanies several words and has been printed on the lower back.

Red rose on the back.

Pretty designs of roses. The best of this design are the green lines that are all around.

The colors used are very characteristic and it seems, at this stage of the gallery, that the tattoos of roses encourage to use this type of color. In this case, the rose is accompanied by a butterfly and other patterns that we cannot see well.

A beautiful little rose not very different from the others. I would have liked to include other designs so that you have a wider variety of designs to choose from, but the problem is that at least 90% are similar.

A very variegated tattoo. You can see two roses on both sides of the main design, which represents the famous Mexican skull. All the elements of the composition stand out thanks to the striking colors that have been used. The design has a nice touch of Old School style.

Virat Kohli net worth 3 times more than Anushka Sharma, know about his earnings

Get thick lips with cinnamon and other homemade tricks

13 Kim Kardashian looks that you should imitate

Know the meaning of the most common tattoos