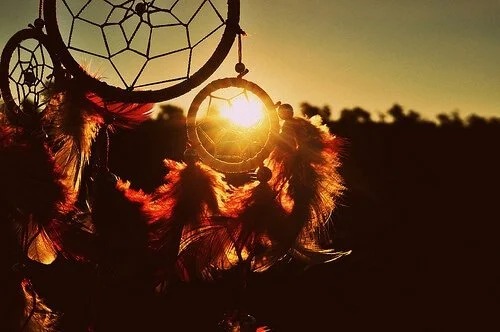 Dream catchers are instruments of power of shamanic medicine, whose origin dates back to the American Indian tribes. Its hoop, traditionally made of willow wood, represents the wheel of life, the mesh or the net are the dreams, desires and illusions that we weave in the Time of dreams, in the soul and in the movement that we generate with our activities every day. In the center of the network is the emptiness, the creative spirit, the “Great Mystery.”

According to tradition, dream catchers help keep good ideas and pleasant dreams with us, as well as protect those who own them. The Time of dreams is influenced by good and bad energies; the latter is trapped by the mesh and dissipates through the central hole with the first rays of the sun.

The meaning of the word dream catcher

The word “dream catcher” comes from the English dreamcatcher.  a small hoop containing a horsehair mesh, or a similar construction of string or yarn, decorated with feathers and beads, believed to give its owner good dreams. Dreamcatchers were originally made by North American Indians.

These objects began to be marketed by the Ojibwa in the 1960s, being criticized by the other tribes for somehow desecrating their wonderful meaning. This makes sense because they are currently manufactured and sold without attending to the magical and mystical process of energization, thus losing its essence and becoming a mere ornament.

Because of this, the belief in dream catchers has spread enormously in recent years. However, most of us do not know the beautiful legend they offer us. Let’s see what it consists of.

The Legend of the Dream Catcher

Legend has it that there was a spider woman named Asibikaashi who took care of the people of the earth. The spider woman watched over every creature in our world, leaning over the cribs and children’s beds while weaving a thin, delicate and strong web that was able to catch all evil between its threads and make it fade at dawn.

When his people dispersed throughout North America, he began to find it very difficult to take care of all children, so that mothers and grandmothers had to start weaving nets with magical properties that trap bad dreams and nightmares, thus protecting their children.

Traditionally, the Ojibwa built dream catchers by attaching strands of willow around a circular ring of about 9 centimeters or teardrop-shaped, resulting in a web similar to a  spider web, made in turn with nettle fiber dyed red.

The ancient legend of the Ojibwa Indians about dream catchers tells us that dreams pass through the web by filtering and sliding good dreams through soft feathers until they reach us. Bad dreams, however, are caught in the tissue and die with the first beam of daylight.

However, for the Lakota people of the Sioux tribe of North America, dream catchers work differently. That is, nightmares go through the net while dreams get caught in the threads and slide down the feathers to the person who is sleeping.

The bad is blocked and destroyed, the good stays with us

There are people who give this a different meaning, understanding the word dreams as aspirations, desires or desires. Therefore, the dream catchers would serve to achieve everything that we propose and yearn for.

The truth is that we cannot ensure that the dream catchers take away bad dreams, bad energies or bad vibes, but nevertheless, it is peaceful to be in touch with Indian culture, because of the magic it gives off.

This culture has filled us and will always fill us with knowledge and millenary traditions that we must strive to keep close in the most faithful way possible because somehow we owe them much of our wisdom.

Meaning of Love (What it is, Concept and Definition)

The myth of the Phoenix or the wonderful power of resilience

Mother’s Day: These are the flowers that you can give to your mother, according to her sign

100 Things To Do When You Are Bored

85 Happy Birthday Quotes to congratulate to Your Family and Friend