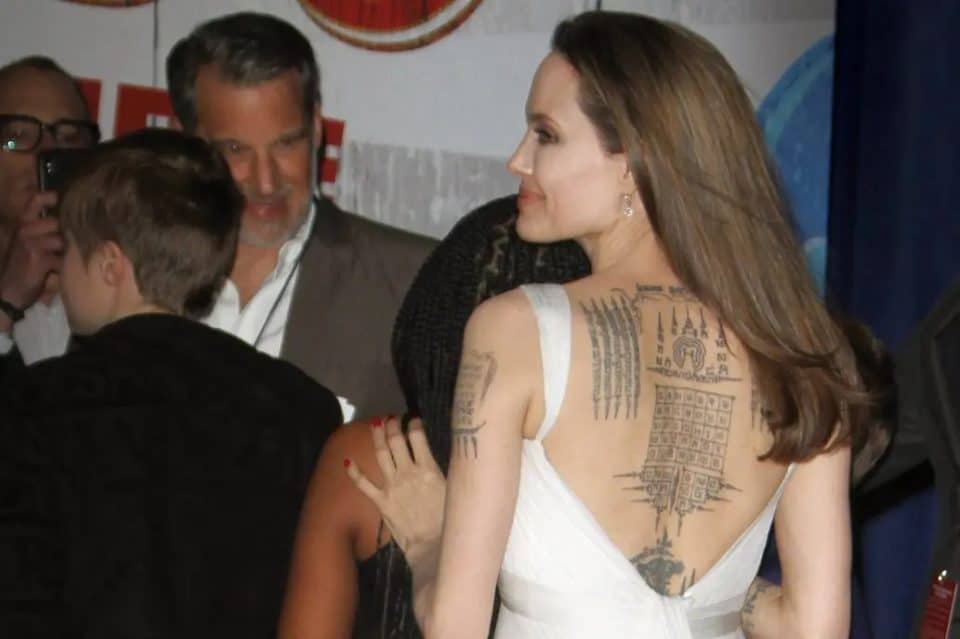 Each of Angelina Jolie’s tattoo on back has a special meaning. One of the first, on her left shoulder, was the name of her ex-husband, actor Billy Bob Thornton (although after the separation she was in charge of deleting it). In the palm of her right hand, she carries the letter “M” in tribute to her mother Marcheline Bertrand, who died in 2007. Throughout the years, Angelina Jolie (43) engraved at least twenty tattoos on her body that she looks proud of in each of her public appearances.

Days ago, at the premiere of the movie Dumbo, she walked the red carpet with her back uncovered, “guarded” by her children Zahara (14), Shiloh (12) and the twins Vivienne and Knox, 10 years old. Her divorce from Brad Pitt (55), which started with controversy, seems to have come to fruition: her lawyers agreed on a fair division of assets. and “Brangelina” continue to be partners in their wine business.

Angelina Jolie’s tattoo on back with meaning:

1) Coordinates: the coordinates of the birthplaces of her six children were printed on her left arm. In 2011, she added the seventh coordinate where Brad Pitt was born in Oklahoma. Before, there she had a dragon tattooed and the name of Billy Bob Thornton, her ex-husband.

Must Read: Pamela Anderson unmanageable in Dance with the Stars 9? The huge rant of Maxime Dereymez

2) Buddhist blessing: It was performed by the artist and former Buddhist monk, Ajarn Noo, whose ancient and painful technique uses steel bars with surgical needles. The design is about five blessings written in Khmer – Cambodian language – that the actress made in 2003 in honor of her son Maddox, adopted in that country.

3) “Know your rights”: written in gothic letters, the tattoo is a nod to Jolie to the song of her favorite band, The Clash. The lyrics have a lot to do with the fight for human rights, one of its main causes.

4) Buddhist Temple: In 2016, just months before their separation, Brad Pitt and Angelina Jolie traveled to Cambodia to get a tattoo. The artist used the same ink on both, a way to “link” them as husband and wife. The drawing reflects a Buddhist temple that remembers being compassionate with oneself and with others.

5) Mantras: They were made in 2016 and they are ancient Buddhist mantras that bring luck and fortune. The design responds to a sak yant, Thai tattoo that combines geometric and animal elements and is believed to provide magical powers.

6) Grid: the image represents the four continents and the four elements: earth, water, wind and fire. It was done in 2016, on the same trip to Cambodia where he got other tattoos.

7) Bengal Tiger: She was tattooed in 2004 to celebrate her Cambodian citizenship. It took two hours of work.

8) Phrase: In Arabic, it means ‘determination’.

Angelina Jolie: the meanings of her tattoos

17 hilarious parodies of Celeste Barber that will brighten your day

Sarah Jessica Parker: back on her cult haircuts