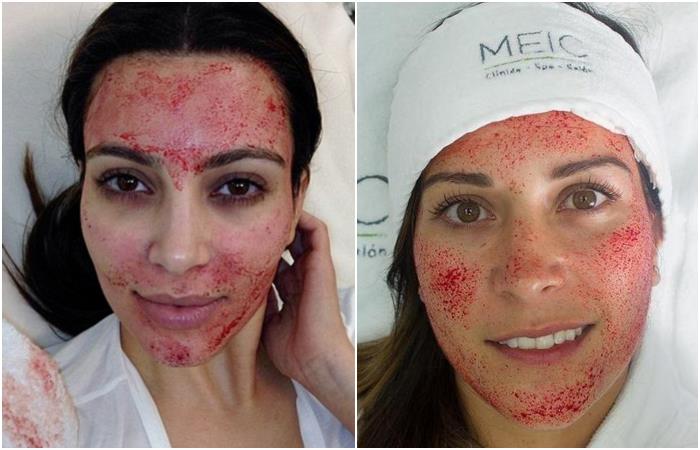 Women are always looking for treatments that help us keep our skin young. Best of all, there are thousands of homemade recipes that can serve us without having to spend so much money. Have you ever prepared it?

Even us, the girls in TheWebFry, we recommend some natural products such as fruits or vegetables that will help your skin is free of wrinkles and acne. Many have worked and the great thing is that the effects are not dangerous.

However, something that we have to be careful of is to follow what celebrities do. For example, the Kardashians are the famous ones with more followers in the social networks and they have become influencers since several want to be like them.

But do not think that just for being known but for the treatments they recommend. Kim said in one of his publications that he had done the ‘facial Vampire’ that was perfect for his skin, however, it seems that some young women in the United States could not say the same, why? Because they got HIV.

What is the facial Vampire?

To delve deeper into this sad news that left us open-mouthed and with a moral, we must be clear about what it means and what it is because two women believed that practicing it would be like the socialite but things They went wrong.

According to Dr. Darren McKeown, the facial vampire is a highly controversial treatment in the world of facial aesthetics: “It is essentially a matter of taking a patient’s blood, centrifuging it to extract the plasma containing platelets and growth factors, and then re-inject it in the face. “

The specialist explained to The Independent that platelets and growth factors begin as a healing response that, over time, rejuvenates the skin. But he says it is a controversial technique because “some studies have concluded that it is effective, while others have shown that it has no effect.”

The success of the facial vampire came after Kim Kardashian published an image on Instagram with a bloodied face. “I always felt uncomfortable with that technique and most of my patients decided not to do it, they looked for other options when I explained my point of view about it,” said the doctor.

The blood, which is injected with small needles, tricks the body into thinking that there was an injury, thereby contributing growth factors to help the formation of collagen. It is also known as micro-needling,  promises to rid the skin of scars and the passage of time.

How does it work?

Some people this may seem quite extreme, others caused nausea and many seemed great because it is a new way to beat the time, but you must take into account that the body is quite intelligent and doing treatments does not mean that your age does not advance.

The first thing specialist doctors do, more dermatologists than others, is to draw blood from the patient’s face. More or less is a tube, something similar as if they made you analysis, only that this is done from different points on the face like cheeks, nose, forehead, chin and more.

You must remember that it should not be the blood of another person but yours as each body is different. The dermatologist Eduardo López says that it is unlikely that the woman who does so will not get infections, pain or diseases “because the patient’s own plasma is used.”

Despite its security, it seems that a spa in the United States was not able to change materials to perform this treatment and injured two people, for the time being.

Women were infected with HIV when they became the facial Vampire

This happened in New Mexico, United States, and has shocked the world. The VIP Spa beauty salon in Albuquerque made this treatment they called as ‘novel’ so that their clients could have a perfect complexion like that of a teenager.

They used microneedles that injected them all over the face, taking out their blood so they could be spread again with gentle massages. However, not only did they not change the material but they infected two women who subsequently underwent the procedure.

According to the health authorities, they sent a statement warning the following: “Additional laboratory analyses of specimens from two clients indicate recent infection with the same HIV virus, which increases the possibility that the two HIV infections have resulted from the procedure in the spa. “

That’s why the managers of the health center issued a message through social networks and on television saying that the women and men who dared to do the “facial vampire” between March and September last year, should be tested of discarding.

Kathy Kunkel, secretary of the cabinet of the New Mexico Department of Health, said that there are more than 100 people who attended the tests to rule out HIV and Hepatitis: “The tests are important for everyone since there are effective treatments for HIV and many hepatitis infections. “

How to make a boy fall in love with you?

what lipstick to choose according to the skin tone?

What does your lipstick say about your personality?