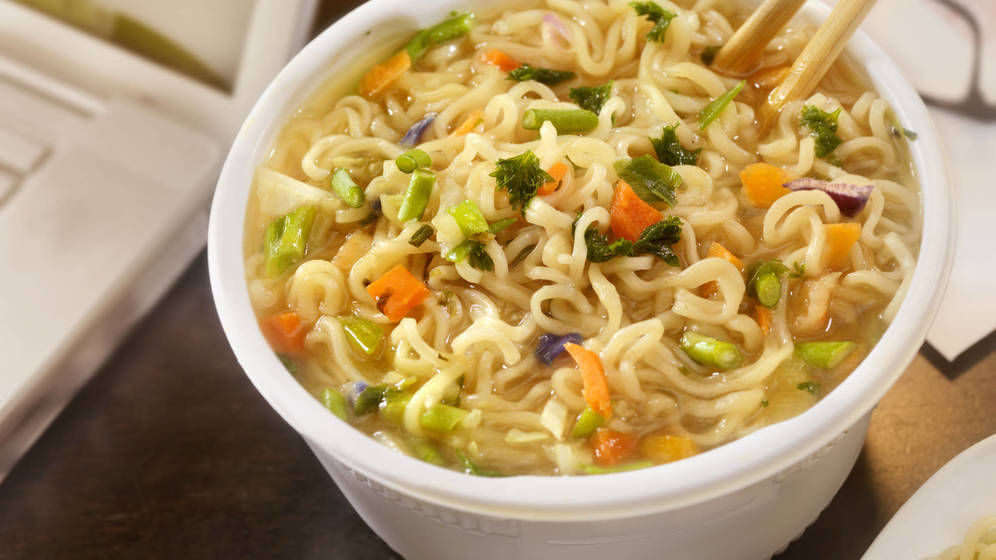 They are comfortable and rich food that can raise the risk of developing metabolic syndrome in women, especially if they are consumed more than twice a week

Nowadays it seems that if you are a university student in a shared flat, your pantry should be crammed with containers of instant noodles. However, this helpful method to quench hunger and quickly and tasty food fixes could be wreaking havoc on the health of consumers. Especially in the case of women.

At least this is what defends a study conducted by a group of researchers from the Harvard School of Public Health (HSPH), whose results were published in the famous ‘Journal of Nutrition’. Apparently, its consumption would increase by 68% the risks of developing metabolic syndrome in women. Although, yes, it is necessary to eat this type of instant noodles at least twice a week. This research focused on a group of 10,711 adults in South Korea, a choice that is not coincidental, given that the consumption of instant noodles in this country is the highest in the world.

However, many will find it curious that women are the most affected. Why? That same question is asked one of the main authors of the research, Dr. Frank B. Hu, Professor of Nutrition and Epidemiology at Harvard: “This may be because women report their diet more accurately or because postmenopausal women are more sensitive to the dietary effect of carbohydrates, sodium, and saturated fats “. The consumption of instant noodles is relatively high among Asian populations. Without going any further, the South Koreans consumed 3,400 million packages of noodles only in 2010.

The study that we echo also values ​​the bisphenol A present in this class of containers that are heated in the microwave. “Bisphenol A, which is frequently found in polystyrene foam containers (widely used to package instant noodles), is a selective modulator of estrogen receptors that can accelerate adipogenesis. They have come to establish connections between bisphenol A and obesity, “explain those responsibly.

Based on the above, Dr. Hu tried to discourage the frequent consumption of instant noodles in a New York Times article published in August 2014. ” Once or twice a month is not a problem. But a few times a week it is. “But what contraindications are we exposed to according to this research? And what exactly is the metabolic syndrome?

What is metabolic syndrome?

The metabolic syndrome, as detailed in the medical website Medline Plus, National Library of Medicine of the United States, is a group of conditions that increase the risk of developing heart disease or type 2 diabetes, for example:

Bisphenol A, which is found in polystyrene foam, can accelerate adipogenesis

Therefore, after reading it, it seems clear that we can not underestimate such a threat. Are we consuming these noodles with as much gusto as the South Koreans? Well, we point ways. The truth is that a walk on the supermarket shelf to house this kind of products shows us the growth that has occurred in recent years. The success of this thriving business has surprised even its own manufacturers. Gallina Blanca, which sells one of the most popular options, did not imagine when it decided to launch it on the market that this would amount to 30% of its sales.

There are also websites developed by fans of noodles, such as Ramenator.cat. A portal created by a group of friends, food enthusiasts, who wanted to share their knowledge and experience about different brands. “We decided to create a website where we could rate them to avoid buying back those we did not like,” they explain.

What do nutritionists think?

In Alimente we wanted to get the opinion of a nutritionist. Thus, we have consulted Sara Garcés, who seems to agree fully with the results of this investigation: “This type of instant noodles are harmful to health for several reasons. First, its composition is very bad, this class of noodles contains large quantities of refined flours, added sugar and fats of poor quality, such as palm oil. A small glass can provide the order of 320 kcal and absolutely no nutrient, ie empty calories.

” In addition, consuming often these products makes the consumption of quality food, for example, to move the vegetables and legumes. Therefore, besides being unhealthy to consume, they are also because eating them we are not eating quality food, “concludes this nutrition expert.

How it all started?

The soup of Chinese noodles or ramen -whose word is probably born from the artisanal way in which they are made, that is, from the union of the Chinese characters ‘ra’ (stretch) and ‘men’ (noodle) -, began his brilliant career to success when, in 1972, a Japanese businessman decided to market in the United States some packaged noodles known as Cup Noodles. “In 1972, our Gardena, California plant began producing Top Ramen, the first instant ramen manufactured and sold in the United States. Since then, Nissin Foods USA has launched a continuous flow of new and innovative products for hungry Americans and lovers of noodles, “they explain in the official product portal.

The different faces of Renee Zellweger at the age of 50